My submission to the Forgotten Games Essay Jam, by Karin Malady

Over a thousand years ago,
An artist created a picture book…

The book was
about a mysterious,
far-off island, where all sorts of
amazing creatures
lived together happily.

The world within this picture book
was well-loved by the people…
However, as time passed,
the book came to be forgotten... 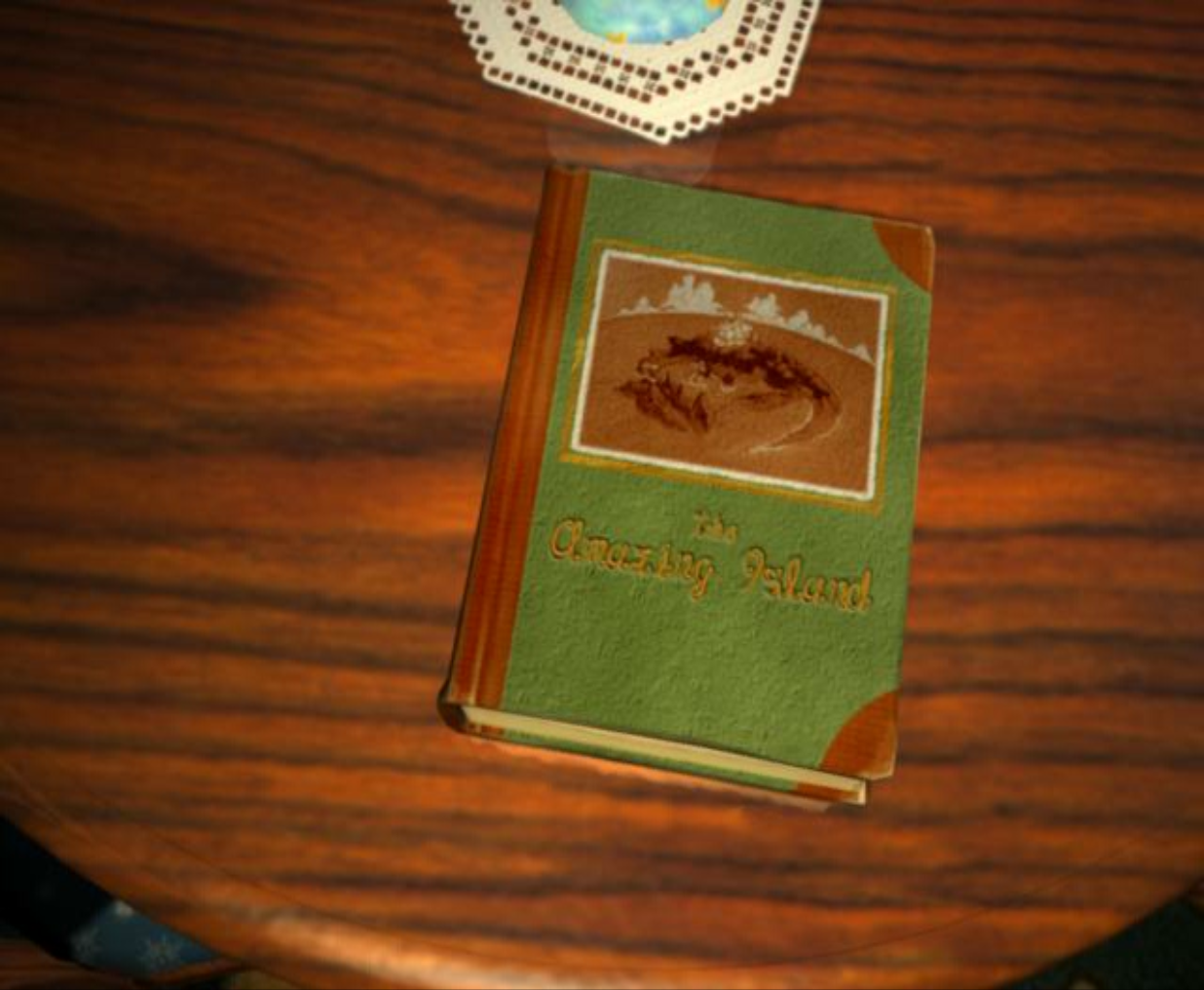 Like most kids at the time, when I was growing up I was deeply fascinated by Pokémon. I didn’t really play the games all that much because they were expensive, so they were something I got every once in a while as a treat. But I did watch the Pokémon anime a lot. What fascinated me more than the exciting battles and cool gym leaders was seeing Pokémon in their natural environment. When I did get games, I gravitated toward ones like those: Hey You, Pikachu!, Pokémon Snap, Pokémon Channel, etc. When I went off into my imagination, I thought of all the ways they could play with me and be friends. My disposition has always leaned towards a sort of loneliness and there are too many reasons I didn’t connect with my classmates to elaborate on. It’s the same sort of impulse as the ways I imagine living in a sitcom or how I get absorbed by slice of life manga. Some deep aching ghost that hides in my heart. One of the ways I sought to fill this as a child was a GameCube game called Amazing Island.

Amazing Island was probably a little too childish, even for me at the time. But the gimmick, that you could design your own monster companions and bring them to life, was deeply appealing to me. The story is simple: an island hidden in a storybook created by the imagination of humans and later forgotten by its creators has been beset by evil. You join forces with the monsters you bring into this world in order to free the inhabitants of the island from the force that is corrupting them. The process of designing monsters was admittedly clever. You draw shapes around each limb, using different skeletal frames (dragon, giant, etc). Then you add eyes, accessories, and a texture. It gives you something that manages to give the sense of a Pokémon yet somehow always still feels off. One unfortunate part of the game is that in order to get the full set of accessories, tools, and frames, you need to beat the game. But that isn’t possible anymore. 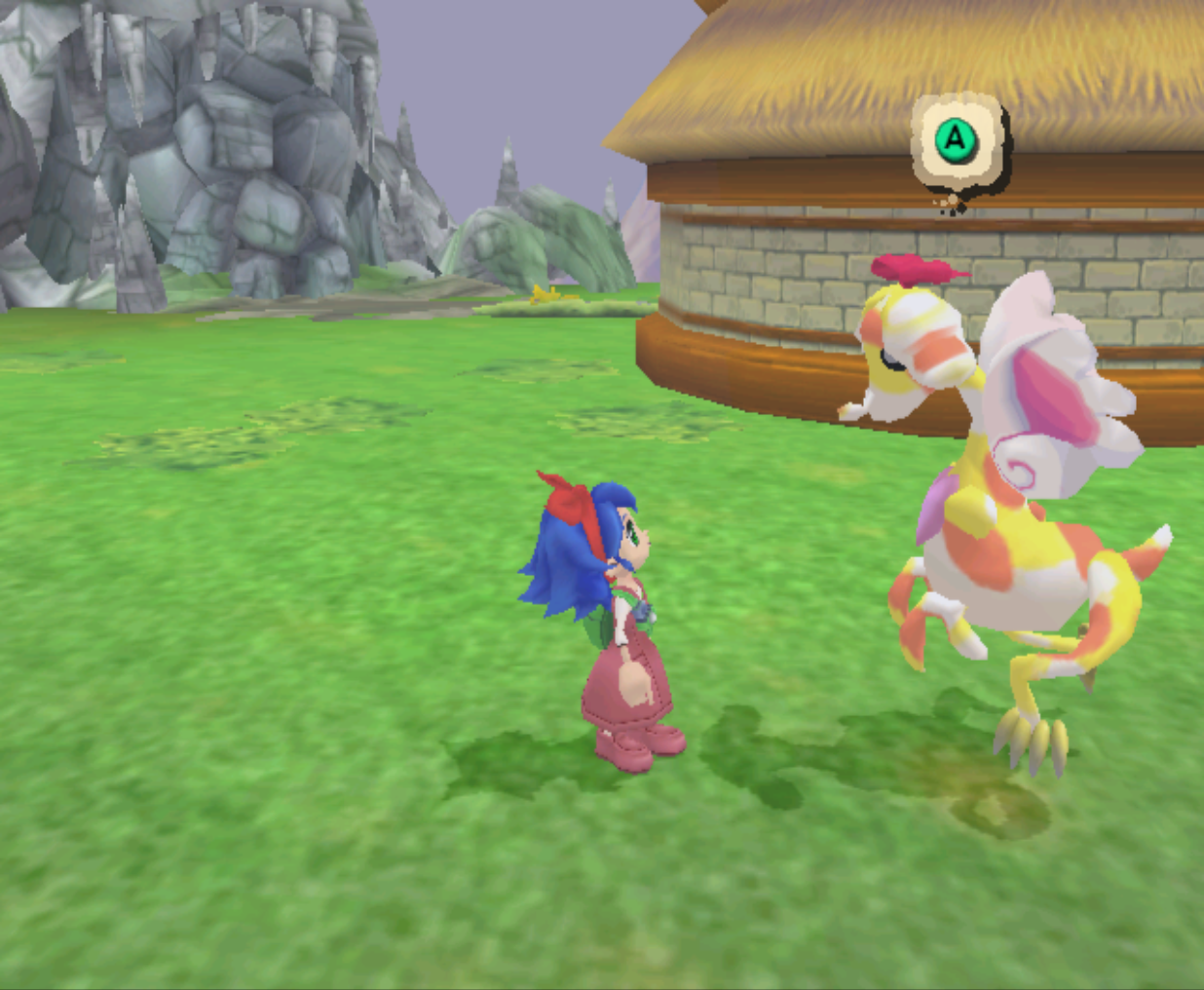 I don’t want to turn this into a full takedown critique. You don’t need to shoot something that’s already dead. And I can tell you with certainty that this game has no risk of getting back up again. Each of the eight sections of the game involves a trial of five minigames you must beat in a row, with only three tries. If you fail, you have to start again. The minigames… were pretty frustrating. When I first played the game as a child, I had to give up halfway through. I had assumed I wasn’t good at it - this was at a time where I assumed that if I was bad at something, it was always my fault. Taking a look back, I now see how clunky it was. Required lots of button mashing that games like Mario Party had tricked me into thinking was a fun way to use a controller. The inputs were incredibly finicky as well. It’s a hard game to play! When I decided to write about this game, I thought I would emulate it and breeze through it so I could play with the full scope of the monster creator. My dreams were dashed almost immediately. 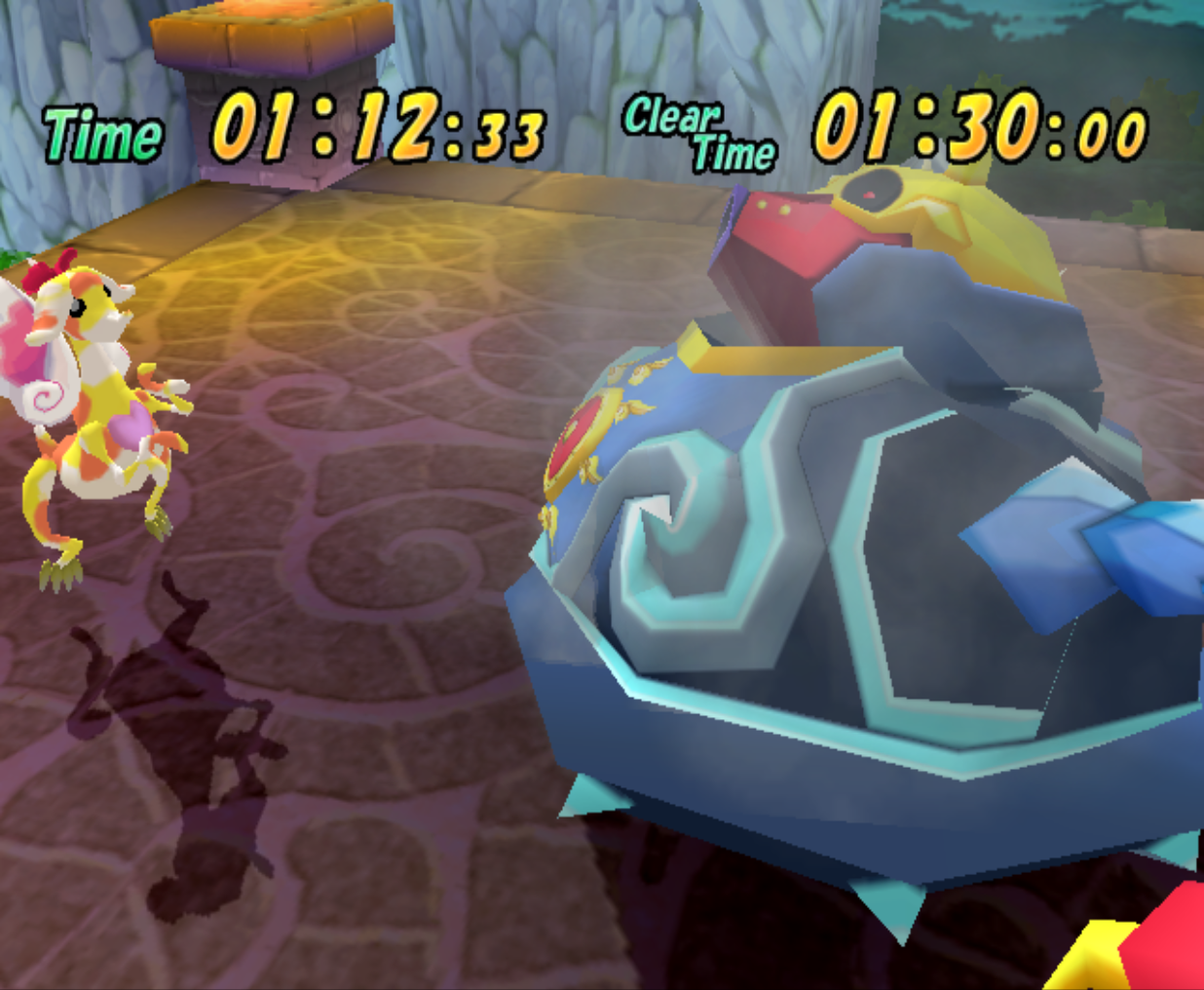 All it took was some carefully timed A presses

Emulated games are not really meant to handle button mashing. As far as I can tell, computers can’t read the inputs as fast as a GameCube could. Thankfully emulators give you a bit more control over the game a physical console does. I could solve this problem by slowing down the emulation by 50%. A completely unbearable way to go through a game. So I tried it at 75% instead. Still not great! With the prices today, buying a $100 GameCube and a $100 disk is out of my range. I’m a little disappointed. My original plan for this essay was to breeze through the game and play with the monster creator. Something could be said about the ways video games enable creativity, like the budding genre of photography games. That option isn’t on the table and now I’m left with an empty feeling.

Nostalgia doesn’t have a strong draw to me. The past makes me uncomfortable and doesn’t really string together in ways I can make sense of. I can only trace the path of that loneliness through my life. It’s not like you can play with the monsters. The only real way you can interact with them is by taking photos that your character frames using their hands. It is very unclear how you are actually taking the picture. This feature doesn’t even work in the emulator! You only really get half the fantasy of making a custom friend. There are multiplayer options but this game did not take off enough to make that viable. It’s probably just competitive minigames, which is not super appealing. Who can mash buttons the fastest? Getting to show off or do anything with my creations would have been better. 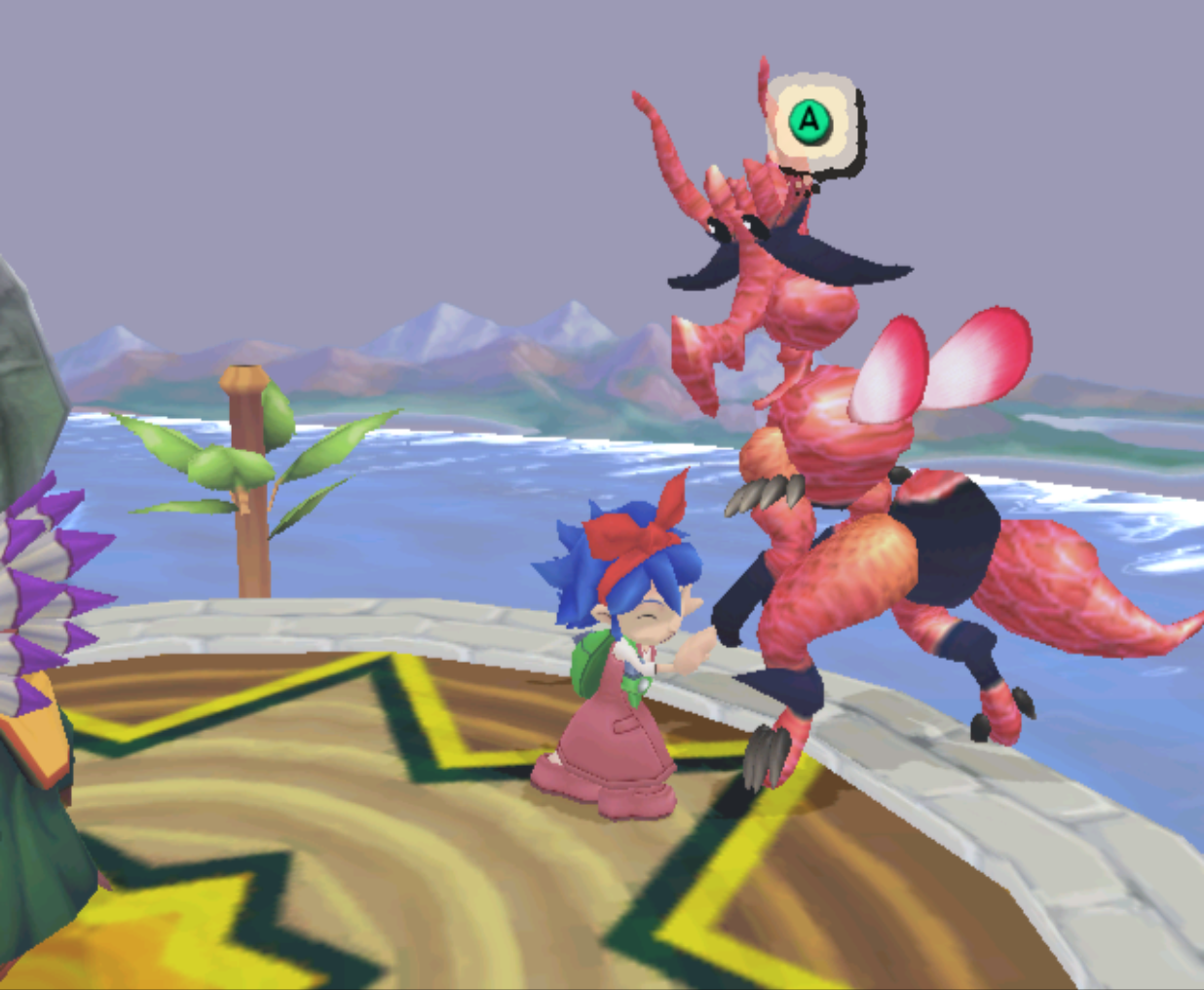 Back to the depths with ye

What did I want out of this game? For the past two, nearly three years, I have been isolated. At least a year longer than the pandemic due to my last employment ending in a breakdown that I am in many ways still recovering from. I wasn’t expecting to be socially fulfilled by this game, but I thought maybe I could spend a few hours making funky little dudes that seemed fun or cool. Some weird creatures to test out the engine that I would end up being endeared to regardless! Yet, with nothing to be gained out of this, I am left pondering the fate of Amazing Island. It is archived in the sense that it can be emulated and found relatively easy. But in its current state it remains unplayable due to technology limitations. History wears it down and wears me down with it. The opening cutscene now feels like a prophecy: “However, as time passed, the game came to be forgotten…”

I can’t help but wonder if I will also be forgotten. It feels like I am slipping away. I don’t see my friends as often. A lot of people I’ve known have slipped out of my life and the only family I can connect to are my siblings. Yet at the same time, memory is a distorted place dictated by your own sense of tone and narrative. The other day I was reminded that I have touched people’s lives in lasting ways. Just by being experienced, I change and change those around me, just as you do. My experience with this game wasn’t particularly profound. It did give me a small place of respite when I needed it as so often are the things that keep me going. There is a possibility space where any piece of media exists in where it could have touched someone’s life. This is just a feature of the way we relate to the world. A mix of synchronicity, emotion, and circumstance. For that reason alone, the idea of something being forgotten becomes tragic. I hadn’t really thought about this game much before the essay jam. Me and you, right at this moment, are keeping that torch burning. It’s almost certain I am going to forget about this game again and with its current borderline unplayable state as an emulation, it’s not long before it’s forgotten entirely. So, let’s take this time to send it off. It deserves at least that much. 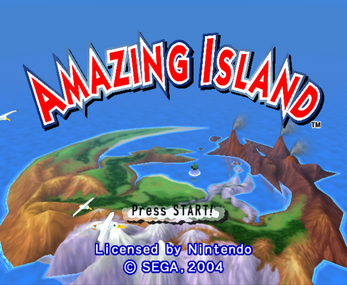